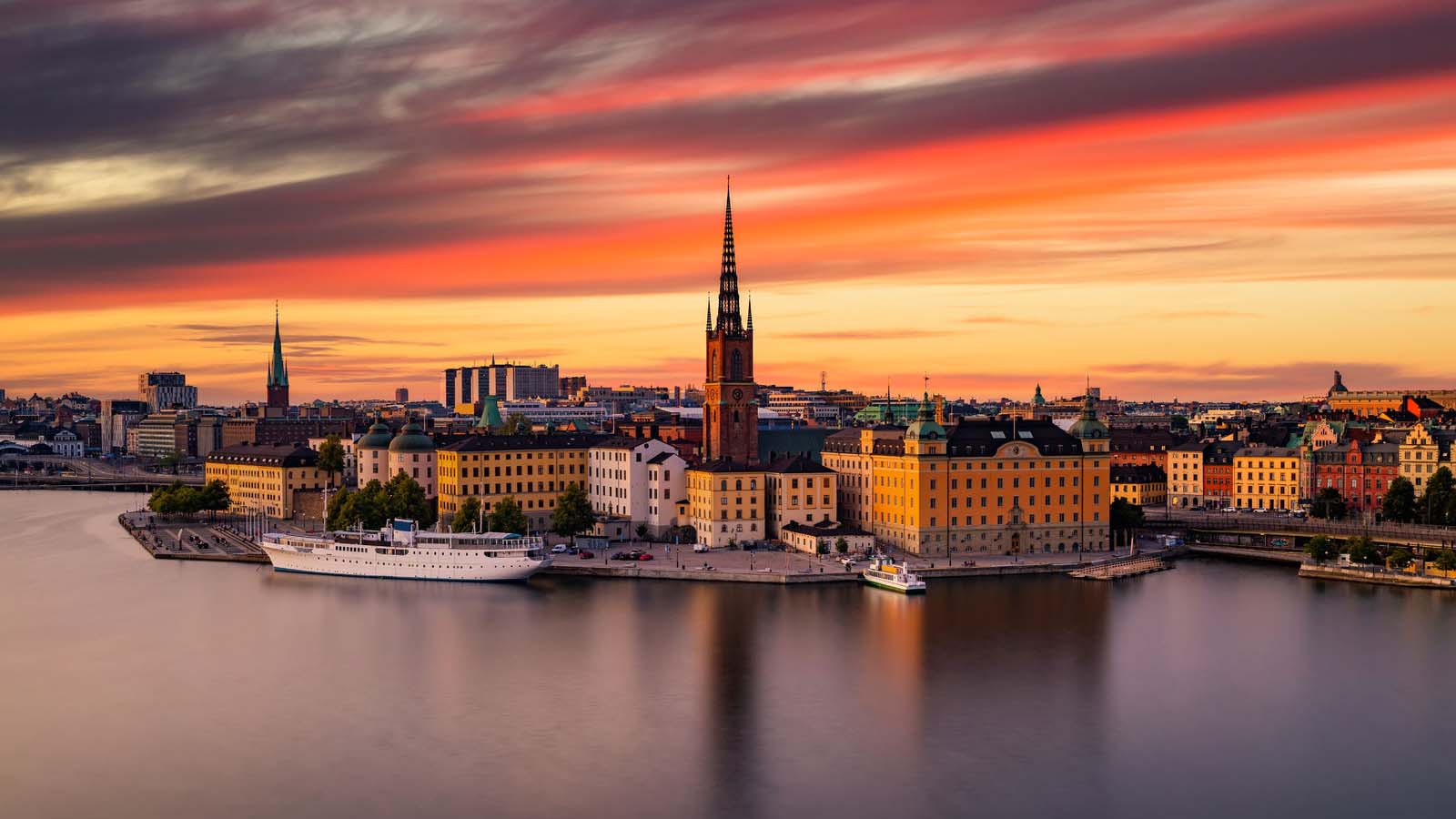 Stockholm is known as one of the most inclusive and welcoming cities in the world. Its contemporary, urban appeal is balanced with centuries-old history and closeness to nature. As for the things to do in Stockholm, the list is endless.

Spreading idyllically across a Baltic Sea archipelago of fourteen islands, it’s easy to see why the Swedish capital of Stockholm has acquired the nickname “Venice of the north”. It seems as if wherever you look, your gaze is met by water.

Located on Sweden’s southeast coast, Stockholm weather changes according to four distinct seasons. Summers are warm – sometimes quite hot – and it rarely gets dark during summer nights. The winters may be mild and rainy but can also be quite cold and snowy. The colours of autumn are spectacular in the city parks, and spring is welcomed by locals, wrapped in blankets and sipping a drink, at outdoor restaurants and cafés.

The city is easy to get around on foot or public transport, and its various districts have their own unique vibes – the island of Södermalm has a laid-back air and is a draw for the creative set, while Östermalm is the picture of refined elegance. Nestling between these two areas, Norrmalm is a busy and vibrant downtown spot, and you’ll find the charming Old Town (Gamla Stan) south of Norrmalm.

Stockholm was officially founded in 1252 by the regent of Sweden, Birger Jarl. By the end of the 13th century, Stockholm had grown to become Sweden’s biggest city, serving as the country’s political centre and royal residence – one that was repeatedly besieged over the following centuries. King Gustav Vasa is forever celebrated for recapturing Stockholm in 1523 from the temporary rule of the King of Denmark.

Stockholm of today is a tolerant, inclusive society that is welcoming of everyone. Stockholm Pride festival, the biggest of its kind in the Nordic region, is a definite calendar highlight attracting tens of thousands of LGBTQ visitors from across the country and the globe each summer.

A forward-thinking, innovative city, Stockholm is home to a growing tech-innovation community and a large number of start-ups – a density only Silicon Valley can compete with. Music streaming company Spotify is only one example of the global names hailing from the city; its headquarters is still based in the centre of the town.

ABBA The Museum is located on the island of Djurgården, a brisk walk, or a short bus or tram ride from the city centre. The museum sits between Gröna Lund amusement park and the Liljevalchs art venue and is a 5-minute walk from Skansen Open-air Museum and the famous Vasa Museum.

Old Town (Gamla Stan) is Stockholm’s original city centre and consists of Stadsholmen island and the islets of Riddarholmen, Helgeandsholmen and Strömsborg. The Old Town dates from the 13th century but most buildings are from the 1700s and 1800s. It is a glorious labyrinth of charming cobbled streets, alleyways, faded mustard and rust-coloured townhouses and meeting squares.

The impressive Vasa Museum is a magnet for the curious, housing a resurrected 17th century Swedish sunken warship.

The Royal Palace (Kungliga Slottet) in Stockholm city centre, Drottningholm Palace (Drottningholms Slott) near Stockholm and Solliden (Sollidens Slott) on the Baltic island of Öland provide fascinating glimpses into how the Swedish royals live, work and holiday. Architecturally, these palaces couldn’t be more different, one is Baroque, one is renaissance and the other is a gorgeous Italian-style villa.

A must-do is the open-air historical museum of Skansen depicting Swedish life in the past by literally recreating a real-life Sweden of the 1900s. A destination restaurant and café here is Gubbhyllan where they make everything themselves the traditional way.

The Stockholm archipelago – Sweden’s largest – is a draw for visitors and locals alike. Take a ferry to one of the islands, such as the idyllic archipelago town of Vaxholm with its village-y feel, defined by wooden houses dating back to the end of the 20th century. Here, you’ll find a range of shops, restaurants and cafés. In the summertime, take your cue from the locals and relax by the waterfront with some homemade ice cream.

Tailor make your own itinerary, or look for the “Stockholm Weekend” pre-costed package in WebConnect:

Stockholm is a foodie destination offering a wide culinary span with an increasing focus on sustainable cooking methods and ingredients. New restaurants emerge continuously, mingling with more traditional eateries. Here we have listed some of our personal favorites: