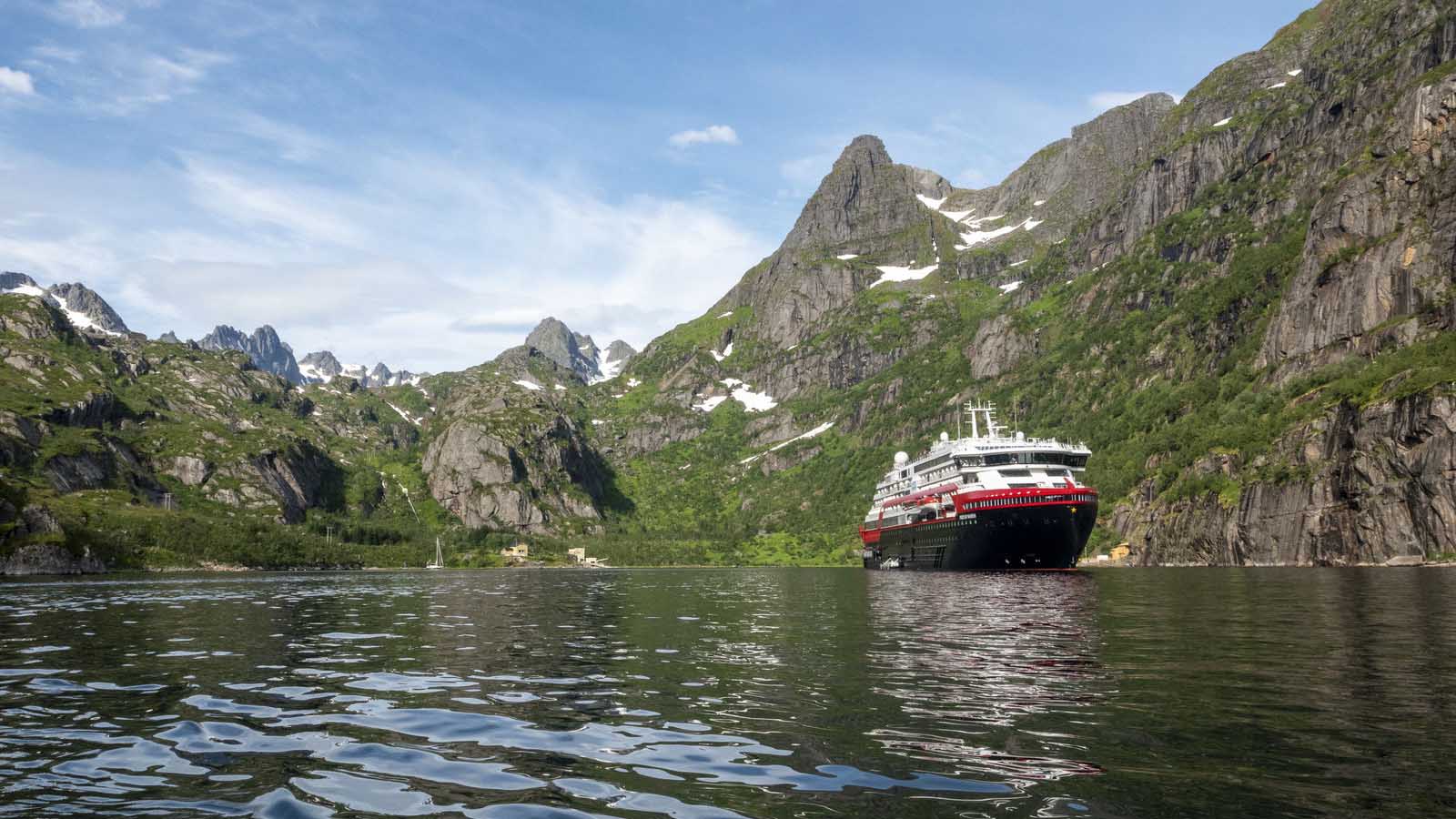 The signature voyage along the Norwegian coast travels from the southern city of Bergen, across the Arctic Circle, up to Kirkenes, and back. It’s 12 days and 2,500 nautical miles of some of the most stunning scenery you’ve ever seen.

Norway’s world-famous fjords will be on full display, dotted with farms and charming fishing villages. Admire the mountains and myths of the Helgeland Coast and brace yourself for the sheer beauty of the idyllic Lofoten and Vesterålen islands.

Along the way, your ship stops at 34 coastal communities, big and small, day and night. We dock in villages and towns for 10 to 45 minutes, and cities for a few hours. Ports we visit at night on the northbound section of the voyage can be seen during the day southbound.

All Aboard!
Your voyage starts in Bergen, the second largest city in Norway and gateway to the fjords. Founded in 1070 AD, Bergen boasts architecture influenced by prosperous 14th century German trading organisation, the Hanseatic League.

If you have some time before your ship departs, visit the UNESCO-listed wharfs of the colourful Bryggen district, now an artisan quarter complete with cobblestone streets. Just across the street is the famous Fish Market which serves delicious seafood. There’s also the Fløibanen funicular which whisks you up Mount Fløyen for lovely views of the city.

To get the most out of your visit to Norway, don’t forget that we can also help you to arrange tours before or after your voyage, such as the Norway in a Nutshell programme.

Before boarding, you can relax in our comfortable guest lounge at the terminal. Once aboard, enjoy the first of many delicious meals made from fresh coastal produce as we depart Bergen and sail the old Viking route along Hjeltefjord.

Enjoy early morning in the breathtaking Nordfjord near Torvik. We then sail past West Cape for our approach to Ålesund.

Ålesund is renowned for its beautiful art nouveau architecture and Atlanterhavsparken, one of Northern Europe’s largest saltwater aquariums. If you’re travelling with us in spring or winter, you’ll have most of the day to explore this picturesque town.

In the summer, we set course for the spectacular UNESCO-listed Geirangerfjord, passing some of the most magnificent scenery Norway has to offer. Once in the fjord, you might get to see the famous Seven Sisters waterfalls cascading down the cliffs.

In autumn, we explore Hjørundfjord, hidden away in the Sunnmøre Alps. There’ll also be a call at the scenic village of Urke to gaze at the view of thousand-year-old farms, the fjord, and the lush mountainsides.

The last port of the day is Molde. In summer, there might just be enough daylight to see the amazing view of 222 mountain peaks across the fjord, called ‘the Molde Panorama’.

From mid-June to late August, the streets and gardens here will be adorned with the sight and scent of roses of all shades, living up to Molde’s nickname as ‘The City of Roses’.

City of Kings and Palaces

This section of the voyage lets us enter the Trøndelag region of Norway, marked by crumpled hills, fields dotted with farmsteads, and low-laying coastal settlements.

Founded by Viking king Olav Tryggvason in 997, Trondheim today is Norway’s third largest city and a mix of historic buildings and a buzzing student population.

You’ll have three hours to explore Trondheim and its array of highlights, either by yourself or on one of the optional excursions we offer.

A must-see site of the city is Nidaros Cathedral, nicknamed “Norway’s Notre Dame” for its Gothic style and considered the most sacred building in all of Norway. Next door to the cathedral is the Archbishop’s Palace where the Norwegian crown jewels are on display.

Nearby, the old city bridge Gamle Bybro sits over Nid River, marking the entrance to the old Hanseatic district of Bakklandet. The neighbourhood’s colourful wooden wharves propped up on stilts by the river’s edge now house trendy eateries. Up from Bakklandet is Kristiansten Fort which affords beautiful panoramas of the city and fjord.

In the afternoon, the ship sails northwest, passing the ochre-coloured Kjeungskjær Lighthouse, islets, and rocky reefs. After that, we head towards charming Rørvik.

We cross the Arctic Circle early in the morning, beginning your Arctic tour of Norway. We mark the moment with a traditional ceremony that is guaranteed to wake you up!

Above the Arctic Circle, you can see the sun 24 hours a day in summer, while in winter, your chances of seeing the Northern Lights greatly improve.

At 10am, we call into Ørnes, near to Norway’s second-largest glacier, Svartisen. The pier here is popular for the Love Bench where sweethearts have declared their lasting romance with a padlock.

We then sail to Bodø, the second largest city in Northern Norway, overlooked by the Børvass peaks. Admire fabulous street art or join an optional boat excursion to Saltstraumen, the world’s most powerful maelstrom.

That afternoon, the ship enters the Lofoten archipelago. The 1,000 metre-high Lofoten Wall is a stunning sight on the horizon, as if there to welcome us.

Stamsund is home to one of the largest fishing fleets in the islands and busiest between January and April when Arctic cod, known locally as skrei, swim from the Barents Sea in the north down to Vestfjord to spawn.

Come evening, when you see rows of traditional fisherman’s huts on stilts, known as rorbuer, you’ve arrived in the pretty harbour of Svolvær, the main town of the Lofoten Islands.

Capital of the Arctic

We dock in Harstad just after 7am. You can go for a peaceful early morning stroll around town.

The ship then continues to Finnsnes, where the impressive Gisund Bridge connects the beautiful island of Senja with the mainland.

Keep on the lookout for a variety of seabirds! There are several colonies nearby, including puffins. Whales can also be spotted in the waters here, especially during the winter season.

Gateway to the Arctic

We then sail to the historic Arctic exploration capital of Tromsø where you’ll have four hours to explore the city or join an optional excursion.

You’ll find Polaria, the world’s northernmost aquarium, on the waterfront. Take your pick from the many shops and restaurants in the city centre, including Mack Brewery and favourite local watering hole Ølhallen pub. There are trendy cafés offering delicious cinnamon buns and where baristas create innovative coffee art. Across the fjord from where the ship docks, you can see the iconic Arctic Cathedral with its beautiful stained-glass mosaic.

Leaving Tromsø in the early evening, we head north to the trading post of Skjervøy, founded in 1622. On our way, we’ll pass the Lyngen Alps which rise majestically from the sea.

The ship reaches the town of Hammerfest on the island of Kvaløya early in the morning. In summer, the island has herds of reindeer migrating here in their thousands.

At the top of Europe

We arrive at Honningsvåg mid-morning, portal to the North Cape where a globe monument marks the top of continental Europe. The optional excursion to the dramatic promontory is very popular, so you’ll want to book early.

Near the entrance of Kjøllefjord village, look out for the striking, building-like rock formation Finnkirka, an ancient sacrificial site once used by the indigenous Sámi. You can join an optional excursion to meet local Sámi, learn about their life reindeer herding, and listen to joik folk songs.

We reach our northernmost port of call, Mehamn, in the evening. If visiting in the months of February and March, you might spot tons of cod drying on outdoor wooden racks called hjell, mainly destined for export.

The ship then sets off for Berlevåg. On the way, we pass the tall Slettnes Lighthouse, the northernmost mainland lighthouse in the world.

We call at Båtsfjord and Vardø in the night, before docking at Vadsø early in the morning.

Looking to the skies

The area around Vadsø is one of the most scenic and popular birdwatching spots in the Arctic, lying directly under the migration path of birds flying from east to west. Watch for hooded crows and sea eagles.

Kirkenes is just a few miles from the Russian border, and the close proximity shows in many ways; from road signs in both Norwegian and Russian to a monthly Russian market and the WWII Russian Monument.

This is the last stop before the ship turns around and heads south, back towards Bergen.

Did you know that you can do just parts of the Coastal Express – from one port to the next, or the one after? Or you can do the whole journey from Bergen to Bergen? Whether you have limited time, or you want to do all 12 days, create an itinerary that suits you. Ask us for suggestions and quotes!